Moroccos Morocco’s King Mohammed VI has expressed his sadness and extended heartfelt condolences on the passing of five-year-old boy Rayan Ouram who fell in a narrow 32-metre deep well last Tuesday in the remote village Ighrane.

Rescuers finally managed to pull ‘Little Rayan’s lifeless body out on Saturday evening in a tragic end to a painstaking five-day rescue operation that gripped the nation and the world. A statement from the Royal Office confirmed him dead after examinations by a medical team on site.

“The King expressed his deepest condolences and heartfelt feelings of compassion to all the family members of the deceased in this painful ordeal, praying the Almighty to have him in his holy mercy and accept him in his vast paradise and to grant patience and comfort to his family,” read the Royal statement.

The Sovereign assured the family he had closely followed the developments of this painful incident. King Mohammed VI had given his high instructions to the authorities concerned to take the necessary measures and deploy all possible efforts to save the trapped boy. “Still, the will of God is unstoppable, and the child died”.

The revered monarch expressed his gratitude for the tireless efforts made by various authorities, public forces, and associative actors, as well as for the outpouring of solidarity and the broad sympathy expressed towards the family of the trapped boy by all Moroccans. 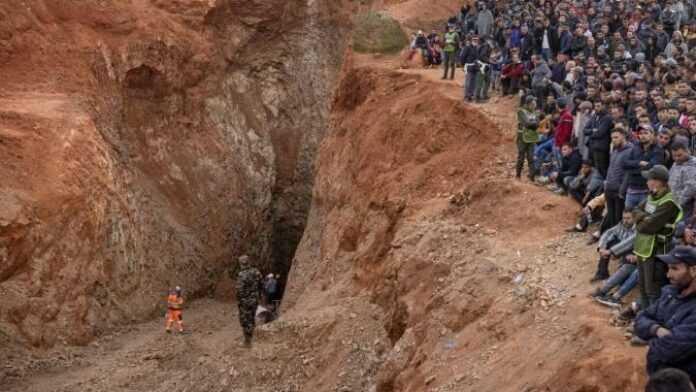 “Since last Tuesday, rescuers have been working hard around the clock to attempt to pull out the trapped little boy from the narrow shaft, which made it impossible for rescuers to go down themselves to recover the boy.”

Rayan’s death was a tragic moment for Moroccans and for the thousands from across the world who have been following up on his case since day one of the incident.
Tributes poured in in the wake of the news that the rescue efforts had failed to recover Rayan alive.

“I want to say to the family of little Rayan and to the Moroccan people that we share your pain,” French President Emmanuel Macron said on Facebook.

“Rayan’s courage will stay in our memories and continue to inspire us,” wrote AC Milan’s Algerian midfielder Ismael Bennacer in a tweet accompanied by a drawing of a child being lifted into the sky carried by a heart-shaped balloon marked with the colours of Morocco.

“We all of us had been holding out hope that little Rayan would make it,” Moroccan-American novelist Laila Lalami wrote on Twitter. “This is all so tragic.”

South African club banned for scoring 59 goals in one match

Pastor marries four ladies who are all virgins at same time