The Chief Executive Officer of Afro Arab Group of Companies, Alhaji Salamu Amadu has been honoured by the Pan African Leadership and Entrepreneurship Development Centre.

The astute businessman received the honorary award during the Child Summit and Awards held at the British Council in Accra.

The award is in recognition of his contribution towards the education of children and the less privileged in the society.

The citation reads “In Recognition Of Your Outstanding Virtues And Selfless Services In Protecting The Twelve Of A Child As Contained In The Declaration, Convention On Other Instruments Of The African Union And The United Nations Convention On The Right Of The Child, The Advisory Councils And In Exercise Of The Powers Vested In Them HEREBY Award You To Have And Enjoy Title, Dignity And All The Privileges Of “ORDER OF THE NOBLE HAND OF HONOR”. 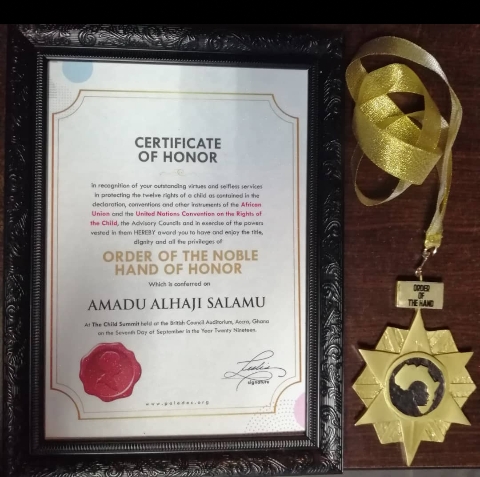 Alhaji Amadu after receiving the award, thanked the Pan African Leadership and Entrepreneurship Development Centre for the recognition by saying “It’s a privilege and honour to be recognized outside the shores of Ghana, I will continue to push it further for the vision to come into reality”

The Child Summit and Awards is an annual event that celebrates African children within the ages of 5-15 years old who have distinguished themselves as brilliant exemplars of society and have displayed outstanding bravery to inspire other children with their actions in different fields.

The event is also committed to increasing public awareness of all forms of issues against children in Africa, develop activities to identify and discuss such issues and thereby provide a holistic and multi-dimensional approach to sustainable solution to these problems.

UPDATE: 34 dead, others injured in gory accident at Dompoase

VIDEO: Full speech of Hon. Joseph Mensah at his ‘Time with the Community’ event